Wildlife of Woods and Forests

admin Posted on December 3, 2011 Posted in My Prague No Comments

The Czech Republic’s forests are very varied in nature. The lowest hills are usually covered in beech and maple, with pines appearing with increasing elevation; spruce dominates the higher levels right up to the tree line. With such variety in composition, it is not surprising that the wildlife is also varied.

In spring, flowers such as violets and primroses appear on the woodland floor, followed by a succession of orchids; the latter do particularly well on areas of limestone. Butterflies are also a conspicuous feature of woodland rides and glades, with fritillaries and Camberwell beauties being especially prominent. Fritillaries are orange-brown with dark-spots and Camberwell beauties are maroon with a cream border. The woodlands are especially good for bird watching. Several species of tits and finches are resident, as are nuthatches and tree creepers. Woodpeckers also live in the forests. The largest is the black woodpecker, which has all-dark plumage (the crown is red in males).

Woodland mammals are generally much more secretive than the birds and are consequently often difficult to see. Brown bears are now extremely rare, but martens, red squirrels, wild cats and roe deer are more widespread.

Wildlife of Lakes and Freshwater 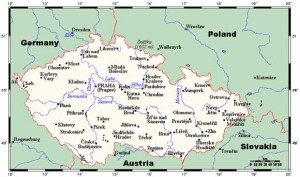 The Czech Republic has many lakes and wetlands, especially in the low-lying south of the country. Many of these are rich in freshwater life and support a wide variety of birds. See post on wildlife near Prague.

In the spring, the margins of many lakes are enlivened by the colourful flowers of emergent plants. Frogs and toads provide a chorus of song to attract mates, and spawning shoals of fish can be seen in the lakes and river backwaters. Herons, egrets and grebes thrive on this bonanza, while other species depend on plant or insect life for their diet. Several species of warblers can be found in the reed-beds and marshy scrub around many ponds and lakes. Most are rather similar in appearance and so their songs are the best clues to their identities. Savi’s warblers have a reeling, almost mechanical song rather like a distant sewing machine, while river warblers utter a repetitive chirp very similar to the song of the field crickets that abound in the Czech Republic’s undisturbed meadows.

Many parts of the country to the south of Prague comprise limestone bedrock. Over time, mildly acidic rainwater has eroded strange shapes in the rock. Above the ground there are gorges, pillars and sinkholes, while below are extensive caves; this landscape is known Wall lizards can be seen basking on rocks in the karst country as karst. One of the most accessible areas of karst is the Bohemian karst, southwest of Prague; explore the area between Beroun (on the E12) and the castle at Karlstein.

Wall lizards reach the north of their range in the Czech Republic. The pattern on the back of these long, slender animals is rather variable, but is a variation of grey or brown with darker streaks. Breeding males usually have orange underparts. In karst country, they sunbathe on rock faces, but they are wary and retreat to the safety of a crevice if disturbed.