admin Posted on February 5, 2016 Posted in Hotels in Prague No Comments

Until a few years ago I was not very familiar with Prague or the Czech Republic, now I am. I have lived there and now I travel back and forward several times per year.Because of this familiarity I am surprised when someone asks me “Where is Prague?”

My first reaction is one of complete surprise and wonder how can they be so ignorant, then I think about North America, I don’t know most of their states and I would have no idea what is the capital of any of the states – so I am ignorant in that area.

Prague has been in the centre of Czech life since the 9th century.The city is considered one of the most beautiful in Europe and deservedly so.It is also referred to as the “city of a thousand spires” and as the “golden city” – look at the photo on the banner at the top of the page, this show a few of the city’s many spires.

The population of Prague City is around 1.1 million and the population of the Greater Prague area is 1.9 million.Prague is a modern bustling city with all modern conveniences similar to any capital city the world over. 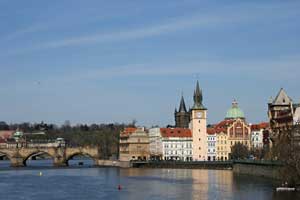 If you are visiting Prague four days is the minimum required to get a good feel for the city.Charles Bridge is one of the main sites and thankfully cannot be avoided.Prague Castle is a must on anyone’s tour list and really requires at least half a day to be put aside to walk around the area – though you could easily spend a full day at the castle.

Prague can be a crowded tourist centre during the months of June, July, and August and though there are many hotels in the city it can still get hard to find a good Prague Hotel.Therefore if you are planning to visit at this time book well in advance.

The weather in Prague has four distinct seasons.Summer can be very hot, above thirty degrees, the winter can be very cold, minus ten often – therefore dress for the weather.Prague is not as cheap a destination as it was during the 1990’s, the standard of living for Praguers has increased tenfold during the last 15 years – however compared to visiting Dublin, London, or Paris, great bargain are still to be found.